You CAN Keep Your Health Plan!

You Can Keep Your Health Plan If You Like It

After all the anxiety that individuals and small businesses have been going through this past year trying to comply with health care reform it finally turns out that – “if you like your health plan, you can keep it.” But don’t break open that bottle of champagne yet, it’s only temporary.

Act guidelines. The extension allows current health policy renewals until October 2016 and small businesses could keep their health plans all the way into 2017.

This is good news for many people with small group health insurance plans because most employees liked their current health plans. Although it does create some confusion within the entire Affordable Care Act since many businesses have already been converting their older non-compliant health plans to new ones

The number of health plans that are non-compliant within the marketplace is unknown, but insurance companies have already cancelled insurance for more than 4.5 million people. This was the first shoe to drop with the unpopular health bill was enacted and the second wave of massive cancellations were set to begin in 2015, requiring large employers (100+ employees) to comply with the new health plan standards.

The extension was part of a package of regulations that set ground rules for 2015 the second year of the public health insurance marketplaces. You can read the rest here:  HHS 2015 Health Policy Standards Fact Sheet

What do you think about the latest extension? Please tell us your comments 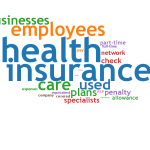